Putting Pork on Your Fork 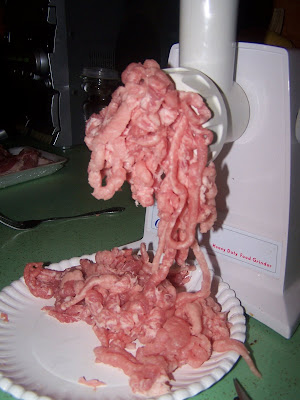 Not too much to report on the farm. The weather in Maine has been wacky... warm, then below zero, snow then rain??

So glad we are down to 2 pigs. A fifty pound bag of grain is lasting well over a week compared to 3 days. The pork chops and sausage are so delicious! My neighbor picked up our ham, bacon, and smoked shoulder today. MM is cooking our first of the bacon as I type.....yum....he just gave me a sample.
Years ago John & I raised a few pigs. I can vividly remember one of our novice pig experiences. We had just moved into our first home and we were wanna be farmers. We went to the auction and bought a 75lb pig. The closest we had to a farm vehicle was John's Toyota 4 runner so we loaded her in the back and off we went.

When we arrived home we put her in a pen that John had built out of pallets. The next morning at 5 a.m. John discovered she had escaped. It was early Spring and John was able to follow her tracks in the soft ground. He discovered her a 1/2 mile back at our NEW neighbors house rooting up their lawn. The chase began! The pig headed straight for their deck and it fell and slid into their sliding glass door. They were awoken by their dog barking and the noise of the pig and MM in hot pursuit. John was young and in his prime I tell you. But, that pig ran faster scared than John could mad. I too attempted to capture but remember dropping to the ground surrendering. The whole family attempted to catch this frisky critter and you know it, after quite some time MM outsmarted her. He hid behind a tree and when it attempted to run the field John was able to get a hold of her. The drama continued, because of the mud season we could not drive up their driveway (as they did not either) so we had to walk her home. Ever try to walk a 75lb pig? We weren't laughing at the time but we often reminisce about that day.

This was our first meeting of our new neighbors and after a bit of landscaping and a 12 pack of beer we became friends for life.

This story was not my planned post for this evening but...there you have it. That damn ADD kicking in again!

A few weeks back I finished reading Omnivores Dilemma. A little deep at times but very informative. It is headed to City Girl's bedside stand next. Now I am reading In Defense of Food along with an awesome magazine MM bought me for Christmas. It is called Countryside & small stock journal. For those of you that are interested in gardening, livestock, homesteading this is a must have . It has few ads and pictures in comparison to other magazines and it is jammed pack with great info.

I have been doing lots of cooking and I will end this with a couple recipes that we have enjoyed.

For all of you that have a freezer full of blueberries. This is the first time I made and ate blueberry pie. MM and my in-laws enjoyed as well.

Add blueberries to crust, drizzle with remaining incredients and then apply crumb topping.
Bake at 375 degrees for 1 hour. Serve warm with cream or ice cream.

This was the bread I made today. It too was a hit, even with the kiddos. Now remember I cheat making bread most days by using my bread machine. I add liquids/butter etc to the bread pan first then I add dry mix after ingredients combined. Make a hole in the middle and add yeast last. I select dough cycle which takes my machine about 1.5 hours to mix and rise. I then shape it into a loaf and put in a glass bread pan and cover with a moist towel to rise (preferably in a warm area) for 1 hour. Then it cooks at 350 degrees for 30 minutes.

And lastly for the Rabid Outdoorsman and Queenie here is my pickled egg recipe you were asking for. It is at the bottom of that post.
Enjoy!

Congrats on the pork in the freezer. We hope to have our first 2 pigs this summer. We did great with chickens last summer. One step at a time. LOL. We work at EMMC in Bangor. It makes the farm happen.

The "Great Pig Chase' story played out like it should have, with lots of adventure and a few laughs!

Found you over at Jen's. Cute pig story for sure. Only experience I've had with pigs is trapping the wild ones.

I just started subscribing to Countryside, yes, I really like it too.

Another favorite is: Backwoods Home.

From the photo I take it you are making your own ground pork. Are you turning it into bulk sausage?

We too subscribe to Countryside and also Backwoods Home.
www.backwoodshome.com

MM might enjoy The Backwoodsman magazine. It has a lot of DYI stuff in it.
www.backwoodsmanmag.com

Oh Thanks so much for the recipe ... I'll make them tomorrow and let you know how the family likes them. Great pig chase story - I raised my kids on a farm with 300 hogs and we had plenty of those chases ourselves. I agree that they may be funny in retrospect but certainly are a pain while happening!

PAULA, WILD ONES. I AM ALL SET WITH THAT. THIS DOMESTIC BEASTS WERE WILD ENOUGH FOR ME.

GW, WE WILL HAVE TO CHECK THOSE OUT.

GW, I forgot to answer about the pork. We were grinding pork to make those meat pies I was talking about in a previous post.

Oh! Love both books and the magazine. Great stuff. Nut there is nothing like pasture raised, home grown pork. Yum!!

Fantastic Pig Story! What a riot...I can picture it all!