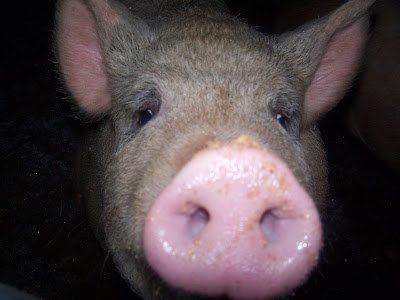 John & our neighbor did the deed. It was time for them to GO! As time went by they became more and more aggressive. So much that the kids were no longer allowed ANY WHERE'S near their pen. The last few feedings I had to pour some food on the ground away from the trough in order to prevent getting bit. We feed them 3 times daily & increased the size of there pen. Nothing helped, just in their blood I'd say. They came from the same litter.

We have 2 remaining pigs....Ham & Pumpkin. They are both mild mannered. Pumpkin is very timid and sweet. I will have a little more empathy when it comes time for her to meet her maker. We are considering breeding them but we need to do a little more research before we jump into something like that. It is amazing how much less food those 2 consume. This chore will no longer be dreaded. 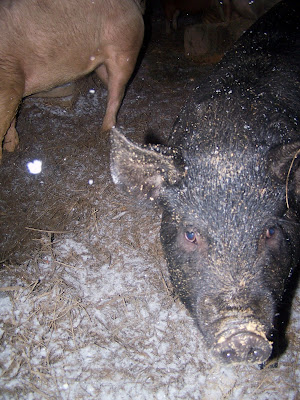 Doesn't he look mean? Don't mind the crumbs. I was disturbing his dinner trying to get a few goodbye photos. 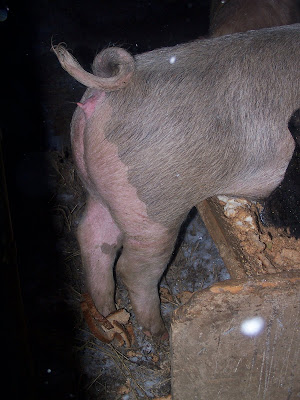 Check out those hams.

Thankfully, I was working when it all went down. I was told it was a quite a learning experience. John had read a butchering book and researched on-line but as he said "there is no substitute for experience." He skinned the first pig which turned out to be much more difficult than a deer which he is accustomed to butchering. It was a challenge to cut the thin hide from the warm loose and greasy fat. He scraped the second one which was no joy either. However, this method ensured the retention of the fatty tissue which makes up a large part of the bacon and adds moisture to the hams. Then down to the butcher shop they went to get the rest of it made into hams, chops, sausage, and bacon.

Quite an undertaking I'd say. That is one of the things I love most about MM. He is willing to tackle just about ANY task!.

"The only man who makes no mistakes is the man who never does anything"
~Theodore Roosevelt
Posted by Country Girl at 8:30 PM

Although I have never butchered a pig, I have done beef, deer, elk, bear, chicken, duck, turkey, rabbit and squirrel. Pig I have heard is harder, though.

i am glad to see you online! we were a little worried about you with the ice storm up your way.

your MM is Super MM! I am thinking about a couple of pigs next year, so any words of wisdom you can pass along is appreciated!

I give them credit for doing it themselves, that has got to be quite the chore!

Wow, what a job. I'm a little afraid of pigs. They do get mean sometimes. Gawd girl, those are gonna be awesome hams! My blog buddy, Ron, at Homesteading Hickory Hills butchered their two hogs last month and he wrote all about it. It sounds like A LOT of work. I'd definitely let the butcher do the work for me in this case. Butchering chickens is easy!

Well, any time Maine Man is ready to give a detailed tutorial, he'll have an eager audience!!

You will have to tell us which one tastes better, Mc cain or O'Bama...

I won't forget the first time I helped butcher a pig. And it was a BIG old boar too. It IS a lot of work. Good thing your MM had help. It's not an easy job by any means. Can't say I've ever heard of anyone skinning a pig before it had hung to cool. I'm sure it was quite an experience. Maybe you can talk him into writting about it.

Wow...ya'll have plenty of meat for awhile!!!

Thanks Don, we were not affected by the storm thankfully but lots of my co-workers were without power for days. He is super MM!!Word of wisdom...have someone else kill them (if you do use a big caliber).

Amy, I saw Ron's post and what is up with him taking down his blog? So sad!

RR, Obama is the neighboors.

GW, It was hanging while he skun it? He will use a different method next time.

PF, I know. Exciting to have more goods for the freezer.