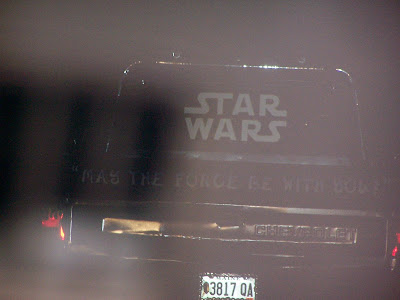 Can you even imagine being so obsessed that you would put this on the back of your pickup?
We were driving behind this vehicle on Thanksgiving night and I couldn't help but take a picture. 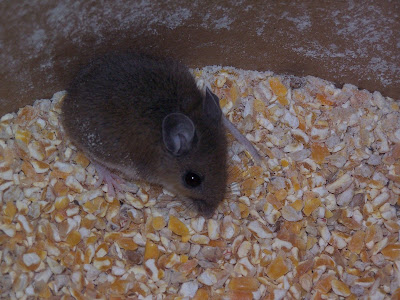 On Thanksgiving morning this is what I found in the cracked corn.
The kids decided to capture him and place them in there catch and release tank.
As we were preparing the tank Leah was "suppose" to be standing guard.

Suddenly we heard a loud screech come from the barn so Luke and I went running expecting to find that the mouse had bitten her. She hysterically described how it climbed up her arm into her pj's went across her back and then back down her other sleeve. We laughed so hard we had tears running down.

That night the kids went to check on "cheese" and said he was sleeping. A little while later I went out with flashlight and discovered cheese was not sleeping but dead. I'd stay the stress of it all?? It was either that or the cat would have taken him out. 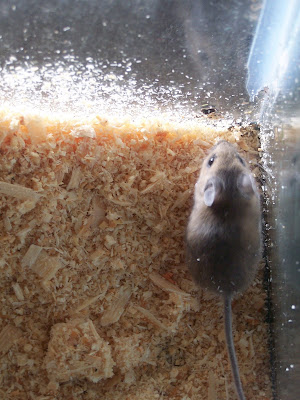 Awww, and the little guy was so cute too! But I am sure they will find another.

Sweet truck! It's no Millenium Falcon but it looks...um...sharp!

Awww, Cheese....poor thing. What a funny story about your daughter, though. Just tonight, I too posted a story about mice...but mine is quiet different from yours. :-)
Well, except for the MOUSE DEATH part. lol
And, yes, as a matter of fact, I *can* imagine being that obsessed with Star Wars...I have two teenage boys who live and breath it, STILL!

Great mouse story! I don't have any fear of mice but that would freak me out too! Now that the weather has turned cold the field mice is trying to make our home...their home and I am not having it. I have two cats, but since they are the world's worst mousers (no really..one of them even helps the mice into the house herself)I have bought some traps...so far it is mice two...me zero as they have stolen the bait twice without even setting it off.

Poor Cheese, I'm sure GreyWolf is right though, there probably isn't a shortage! ;)

Okay, yeah. It was climbing on her back? Under her shirt? I think I would have freaked out, too.

Lets just keep them in the walls....Im fine with them visiting in there.

ummm yes I can imagine being that obsessed...did you know my real name is Leia....lol

THANKS FOR ALL YOUR COMMENTS.
GW, HE WAS A CUTE LITTLE BUGGER

FG,I SAW YOUR MOUSE STORY. I WOULD HAVE FLIPPED.

SPH,I HEAR YOU AND HOPE OUT CAT KEEPS THEM OUT.

FM - I DON'T KNOW ABOUT THE WALLS IF THEY LOOK OR SMELL LIKE DANNI'S DID.

PIE, I DID NOT KNOW THAT BUT I LOVE IT. MY KIDS GET RAZED THINKING THEY WERE NAMED AFTER STARS BUT THEY WEREN'T.