This past week Flower Girl was "Star Student." Over the weekend she had the privilege of bringing home a "special" bag filled with goodies. One of the items was a stuffed frog. Upon awakening one morning we discovered that Mr. Frog was missing an eye most likely by one of our naughty dogs. The eye was no where's to be found. FG was devastated, big tears and all! I told her that I would buy a new one to replace it, she declined. I offered to make a fancy little eye patch, she was all set with that. Last minute Monday night Maine Man opted to do some repairs of his own. 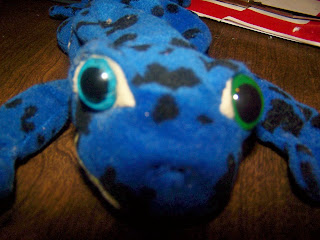 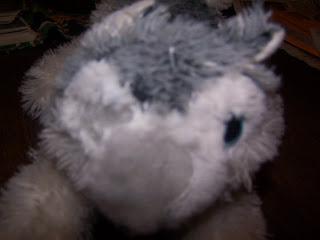 (donor)
FG was to scared to tell her teacher what happened so this morning I wrote a letter to her teacher to ease the pain of FG's confession.
Dear Mrs .........,
This weekend when FG had the "star student" bag the frog sustained and injury loosing on of his eyes. (? the dogs) FG's dad found a donor and performed a transplant. The color doesn't quite match but he has nearly perfect vision. If the transplant fails we will be more than willing to replace the frog.
Respectfully, The ........
P.S. Sorry for the mishap

Now I am just hoping she has the courage enough to give it to her. She was scared she'd "get in trouble". Then I told her about a story when I was in first grade. I was at the chalkboard and I peed my pants. Sr. Rita asked who had done it and I didn't dare admit. She went around and felt every one's bum until she discovered I was the guilty one. I was humiliated in front of the entire class! Had I only admitted my fault initially. The kids were quite entertained by that story.

Face your fears baby! Can't wait to see how she did.

Poor darling! I think we have all had a mishap of one sort or another at school or involving school. I certainly did! Once in science class we were disecting crickets, and my cricket's leg flew off and went soaring into the air to land in teacher's hair. Yuck! LOL

Oh, poor sweetie! It always feels like the end of the world at that age. I love the way you handled this.

Facing things up is hard, no matter what the age I think. I know I still struggle with it! I'm glad that she was able to work though a solution with the transplant. Ooof, though, it's hard to figure out how to help. Did you ever find out if the dogs were in fact the culprits?

I feel for her - I probably would have been the same at her age. By the way, I loved your letter very creative.