Confessions of a Bad Beekeeper 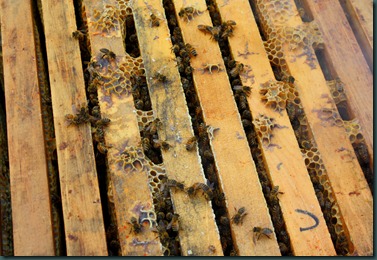 One cool, winter evening last year as I thumbed through an adult education flyer I got this bright idea of taking a bee keeping class. 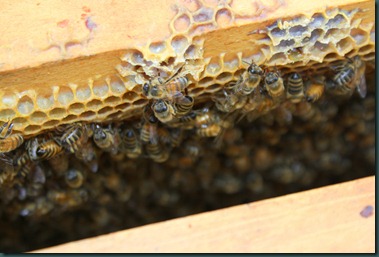 By June I was an official beekeeper…that honestly didn’t have a clue how complex these little creatures really were.

I thought medical terminology was challenging in nursing school but at this point I think bee terminology has it beat.  How many lay people have ever heard of bee space, capped brood, propolis, nukes, & varroa mites? 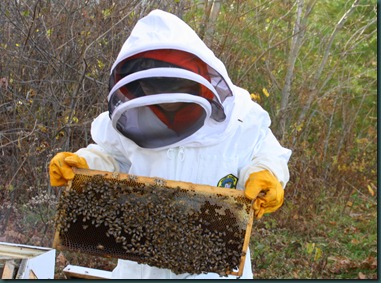 Here’s County Boy, remember the child who wanted NO part of my bees!  I’ll never let him live that one down!

Several weeks back he helped me winterize them. 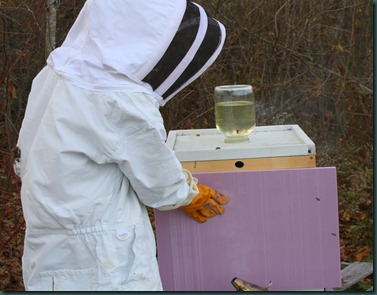 Here’s the deal, when I first started  bee keeping I checked them  every week as instructed.   Despite my frequent checks I was never able to identify the queen.  Towards fall I checked them less and less with a span of over of month going by.  I remembered I was suppose to treat them for mites but according to the place I get my supplies I was “too late”.   Ugggg….so I dusted them with a little powdered sugar for good measures and treated them preventively for Nosema  (aka bee diarrhea).

With this being the first year I did not harvest any honey from them.  I question if they have enough honey for themselves to make it through a long Maine winter.  As pictured above I have given them some sugar water but that won’t be enough.  I will have to do a little more research on winter feeding.

Last night I went out by flashlight to put there top cover on and be sure the foam insulation was still in place before the storm.  On the way out the door Maine Man  called me a “bad beekeeper”, hence the title.  He’s right!  Beekeeping isn’t really a fly by the seat of your pants project but that unfortunately is how I roll. Hopefully they’ll survive this winter despite the neglect.

The bad thing is that even experienced beekeepers sometimes lose hives over the winter. Bees are complex so sometimes things just happen. Still, you have learned a ton so regardless of what happens this winter you will be much better prepared for next year!

Have some friends that have raised bees for years!

Bees are on my wish list but I'm afraid I'll be a bad beekeeper as well. I do hope yours will do well this winter.
Judy

I just found your blog. We are in our second year of beekeeping. Our first year was not successful at all. This year we've made it to winter and hopefully will make it through. I completely understand where you are coming from.