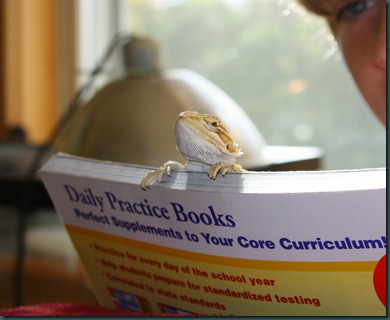 Country Boy  & Flower Girl begged and pleaded with Maine Man for his permission to get a lizard.  I didn’t really care either way.  It was their money, a science project of sorts, and heck what’s one more  animal.

So Saturday the kids and I picked up our class pet “Levi” and the kids settled him into his new home.  Sunday CB reviewed the details of his care with FG & I.  He and his father were headed up-country to my dad’s house on a hunting adventure.

Monday I awoken to the phone ringing at 6 am.  Jumped up, surprise the ER calling for MM to come in….arggggg, let the dogs out, peak over at Levi’s cage to find a lifeless, cold, non-breathing reptile that I am suppose to be in charge of.

At this point I am completely freaking out as I know how devastated CB will be upon his return.  So I wrap Levi and a paper towel, pay bills as there is NO possible way I can fall back asleep after this discovery, and wait until the pet store opens.

9 am the pet store opens so I call to discuss my situation.  Unsure if it was something we did to kill it.  Was it warm enough, was it able to access it’s water in the water bowl, stress of the move, who knows?  Levi had a stubbed tail so I even went as far as asking if they had the other one that looked similar.  (In hopes that CB would never know he had been replaced).  Even asked the lady if she could help out with a discount as I was now the one paying for replacement.  She agreed and even asked if I had the body if I’d bring it in so they could try and figure out the cause of death.

Despite the madness of the day ahead we squeezed in some time to head a  few towns over to the pet store.  As we where about to leave I grabbed Levi wrapped in the paper towel, peaked down as I went to place him in a plastic bag and he blinked at me.  I couldn’t believe my eyes!  He had in fact became too cold during the night and went into some sort of hibernation state.  What a relief on many levels: emotional, financial, and time saving as we had an afternoon appointment to follow.  This mad situation also made for some good laughs throughout the day.  The best was when I had to call the pet shop owner and explain my mistaken diagnosis.  Guess I wouldn’t make the best veterinarian, better stick to nursing…LOL

"beardies" are awesome once you get used to their care requirements, lol glad the little critter is ok :o)

Hooray for Levi !!!
Now that's a learning experience. Without the tragedy.

Lol, would you like me to send you some hair dye for all the added greys this will cause you later in life? Time to find out the 'incubation' temp and keep Levi's container warmer than it for your own peace of mind :).
Thanks for the laugh and reminding us these things happen to all parents!

I love this photo. And the story :-)
What a wonderful happy end!

Funny! Yep, those little critters need lots of warmth. I liked the "blinked" part best :0 Love the photo, too.