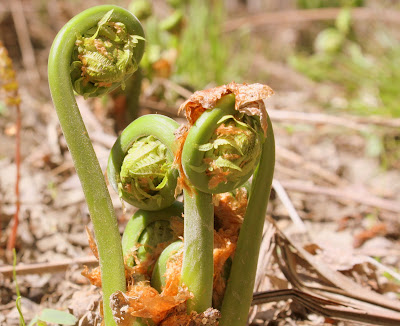 The last weekend of April the kids and I headed out for our 2nd annual fiddlehead picking adventure. I was the only excited one, they protested a bit but being the "mean" mom I am I made them come along. For anyone that is interested in learning more about identifying them click here and read my post from last year. Some fiddleheads had already passed by and some were not up yet but I was able to gather approximately 5 lbs. Within minutes of arriving to our destination the kids had stripped down to their swim suits and were up stream hooting and hollering. Rough life they have.... with a wicked "mean mom" you see;)

I picked and they played. 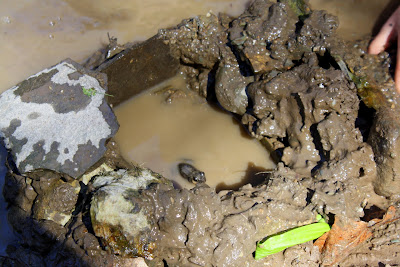 They even had time to make a little habitat for "froggy junior".
On the way back out of the woods the kids did help picking a bit.
Either way I was content just being out there in the warm air.
Sometimes it is the little things we do that we often take for granted.

FYI: Anyone who left comments for FG's birthday post they were removed because blogger was having some issues.
Posted by Country Girl at 8:59 PM

What a meanie! Keep saying I'm going to learn how to find fiddle heads and pick some. Will have to settle for buying them this year. :)

I don't have anyplace to pick them so I support the people whole sell out of their vehicles along the road. I hope to get enough to have a couple of meals and then let the rest join the Dandelions at freezer camp until some blustery night in January.