Bad to the Bone! 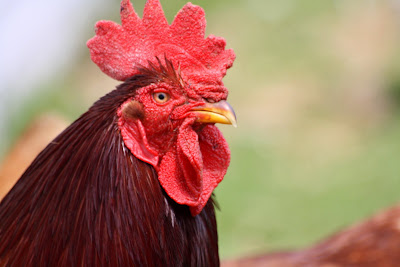 Last Sunday, Mother's Day Bob FINALLY met his maker. He was the farm bully and everyone feared him except Maine Man. Bob didn't mess with MM very often, only tangled with him on rare occasions. His near death experiences reminded him to stay clear of MM. However he picked on everyone else and I was his #1 target, he made me cry on more than one occassion. So basically if you planned on being within 8 feet of him you'd best have a weapon although that did not always stop him. Really... he has attacked me with a pitch fork in hand. He's picked on the kids, both my parents knocking my mom to the ground and he once left a spur in my already injured father's leg. We gave him away once with fair warning and by the end of the summer he returned. As of lately he had become more aggressive running rapidly from afar unexpectedly and I had ENOUGH! That morning I awoken to Flower Girl screaming "Boooooooob". She was out picking fresh eggs to cook me breakfast in bed. Country Boy came up to my room and I said "kill him". With no resistance CB went out and did the deed. They skinned him and he & all the fixings were in the crock pot by 9 am. After all day simmering he was tough as heck. I feed out what meat I could pull off the bones to the dogs. I'm sure our Boxer, Rona took great pleasure in eating Bob because she often fell victim of his violent attacks. The broth I saved for soup stock. Tonight I cooked up a DELICIOUS Asparagus Bisque and the rest I froze. The recipe came from this Bed & Breakfast web site for anybody that is interested. (under lunch then soups). Some of the asparagus came from our garden (first time ever!!) and since I did not have enough some was store bought :)
It has taken a little getting use to not being guarded in the farm yard but it has been a pleasure!
Posted by Country Girl at 6:52 PM

I had a cockerel once who only made it to about 4 or 5 months of age as he tried to take my eye out. His claw scratched my face from about a 1/4" under my left eye, across my cheek and down to just next to my ear. He had a one way ticket to Jason's butcher shop after that! I suspect he would have been like your roo (or worse) if he had lived any longer!!
Lisa the Local :)

I don't know you, but I have been following your blog and really enjoy it.

We recently got rid of a nasty rooster, too, and I felt I had to share because all of my friends around here (we're Connecticut folk) made me feel very guilty about it. But he was a jerk of a Barred Plymouth Rock and I had had ENOUGH, just like you. Now day to day chicken-related activities are much much easier and once again, I am enjoying the company of my laying ladies. It's nice to not have to carry a bow rake with me around the yard!

Keep writing. I really enjoy hearing about your family's adventures!

This article brought me belly laughs. Our grandaughter age 3 1/2 was terrified of BOB with that said R.I.P. Bob you had a good life far better than most. CB job well done!

OMG I would have FREAKED out. It is so surreal to me how nasty roosters can be!

Sounds like even in death he was tough as nails! Glad you at least got some good broth off of him!

Out of my 9 chicks, I have one rooster. He's pretty mellow and easy going now, but if he gets aggressive at all I don't think I will have any problem having chicken for dinner. :)

After having a few BOB's at my place I decided to "hand raise" the next one. It wasn't difficult. When our next batch of chicks arrived I spent time handling them and as soon as I could tell which were cockrels, I selected a couple for extra attention. I named them and talked to them as I held them and fed them treats. After they got older and didn't want to be held I still made sure that they were hand fed treats until they made it past the next spring. That is when aggressive patterns seem to emerge. Any signs of aggression were delt with by stern words and no treat. Most learned. Excess hand raised roosters were given away to neighbors who are amazed by their behavior. I have hand raised my roosters for 4 years now and start a new one each year. I now have 30 hens and 3 adult roosters and a very peaceful coop.

I wonder if it's a breed thing as well as age - two leghorn roosters in my lifetime (1 when I was a kid, and 1 up till a year ago), both very sociable with people, but good protectors of the flock too. Conversely, we once had a pair of barred rock roosters with a larger flock of barred rock hens and they were useless - aggressive to us, aggressive to each other and the hens ignored them completely (flock size was probably an issue too). I've had a few Rhode Island roosters in my time, which is what we have currently, and I'd go with the hand raising folks with these guys - I've had both aggressive and friendly ones. The current guy (Rusty) is about a year old, and I'm waiting to see how he turns out - currently he seems to have a healthy respect for us, and yet will accept bread crusts from my hand.

LOVED reading everyones comments. Smart thinking GreyWolf I am going to try that this time around!

Try cooking the next bird in a pressure cooker. The bird will cook quicker and the meat will be moist and soft and almost fall off the bone (if you cook it too long, it will fall off the bone). Same for Duck. You could even cook your turnips, beets, potatoes, sweet potatoes, carrots, etc with the bird for additional savings.

Finally lost the last of the Muscove hens that I bought from you 3 or so years back. I just wasn't as quick as the fox. Your farm is looking good and the children are growing up so quick.