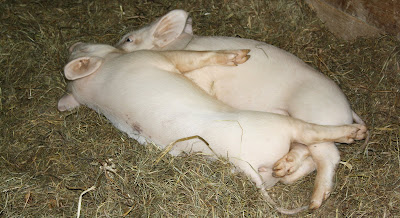 HELP....... Need some names folks! (1 male, 1 female)
If you have been a long time reader you know we've had some naughty pigs named Obama & McCain who are looooong gone.
We also had pigs called Ham & Pumpkin. Ham delivered the first piggies here on the farm last summer. (hot looking picture of Maine Man on that link too)
We raised 2 of her piglets, one for our family and one for a friend. They were called Barbie & Q. Barbie went to market a while back but Q just went last week with a hanging weight of 340 lbs. As it has been SUPER warm here in Maine as of lately MM did not want to attempt processing the meat. He has processed the last few pigs and even posted about it here. Instead we gave half to a friend and they paid the processing fees, we both made out!
That pig processing post of MM's is the 2nd most visited post on this blog. You know what that #1 most visited post on this blog? MM's "how to build a chicken plucker ".
That man writes 2 posts in 3 years and I post weekly. Something is wrong with this picture ;)
Upcoming posts (of his) will too be popular if he ever gets a chance to make a wind turbine which he has talked of and/or build a hot water solar tank. If anyone can do it, he CAN!
K, folks I'm counting on you here. My friend that owns one of these piggies wants to name them H1 & N1 but I just can't do it.
Suggestions?
Posted by Country Girl at 11:00 PM

Hmmm... I could see H1 and N1... Or Tid and Bit. Oh, or how about Bay and Kahn. Or Sue and Sage- but that's a stretch.
For non-food related, I was thinking Bogie and Bacall for some reason.
It's a tough choice. Have fun with it. Good luck!
Judy

Ham Bone & Spoons, Fred and Ginger, Spamela and Jimmy Dean, Rosco and Pinky....I am walking away now or I could be here all day!!! I am having way too much fun for a grown woman!!!

Hoover and Dyson cuz I bet they can vacuum up the food.

Thanks for all your suggestions.
H1 N1 it is!