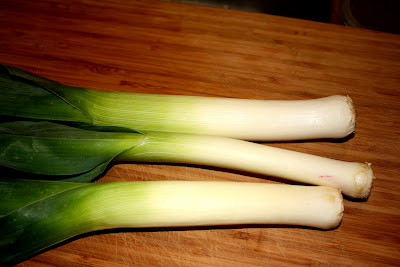 Over the years I have heard of leeks but I had yet to try them. I considered asking Maine Man to plant some but I thought it may be a good idea to give them a try first. 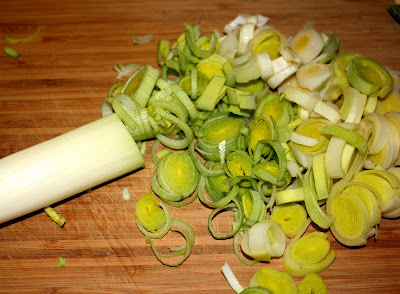 I googled "Best potato Leek Soup" and I came across this recipe at Pinch My Salt's blog.
It is a MUST try! I will be making a crock full for Tuesday's celebration at work for Doctor's day per request of my co-workers that sampled this SACRED soup.

I encourage you to peak over at her blog. There is a story behind this recipe, it was her late mother's. She also has a photo tutorial that walks you through all the steps. For whatever reason I put my camera up after sauteing the onions & leeks. 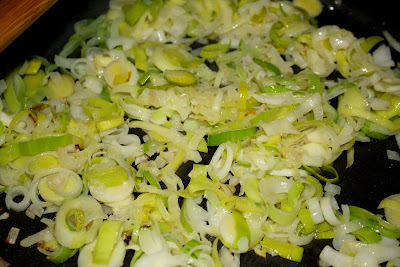 This is the ingredients as posted on Pinch My Salt. I will write my modifications below.
3 Tablespoons of butter
3 leeks, thinly sliced
1 medium onion, chopped
6-8 russet potatoes, thinly sliced 3 1/2 cups chicken broth (or enough to barely cover potatoes)
1 cup of heavy cream
salt and ground pepper to taste
1. Melt butter, add onions and leeks. Cook until limp and just slightly brown.
2. Add potatoes and broth. Cook until potatoes are tender. Mash potatoes until desired consistency.
3. Add heavy cream, salt & pepper. Cook on low for 15 minutes, stirring frequently.
So here is what I did for modifications:
*I did not use russet potatoes, used what I used what I had on hand
* I used homemade chicken broth rather than store bought. I have been making broth since 2008. I refuse to buy it in the store when it can be made for virtually nothing and there is NO doubt that it is better for you.
*For dairy I used nearly 2 cups. Instead of heavy cream I used half half & half and half whole milk. That is what I had in the fridge and the substitution saved on calories.
* After sauteing the onions & leeks I put them aside in a bowl rather then cooking with the potatoes. I think it preserved it's crispy nature. I did mash the potatoes but left them chunky.
I do not know about you but I prefer chunks to puree. I'll have my share of puree when I'm in "the home". ;)
Flower Girl is big on soups. Actually that girl will eat just about ANYTHING! She said this was "the best soup you've ever made" and "make sure you write down the recipe." So here it is FG!
p.s. MM liked it too!
Posted by Country Girl at 9:08 PM

That really sounds like a good soup. I'm going to give it a try.

Thanks for the recipe! We moved onto a parcel that has a large patch of wild leeks, but I've let them go unused for a few years since I didn't know what to do with them.

I've always avoided leeks because I heard that they're such a pain to wash the dirt out of, and I have a deep fear of biting into something and getting gritty. Did you find them hard to wash?

No Jenn they were store bought so they were clean. I just rinsed them off with water. We will grow some this year so I will let you know how hard they are to clean straight out of the garden.

Ahhhh, my grandmother used to make the best leek and potato soup....a recipe from Germany.

Sounds delicious! I think I'll make it for myself. Hubby is not big on soup, who knows, maybe this will change his mind. :)