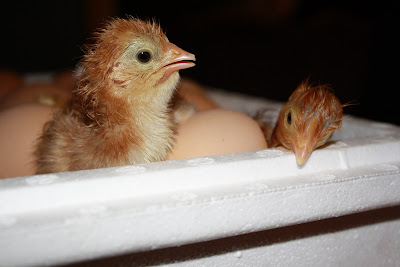 Back in February Country Boy & I filled his incubator with eggs. 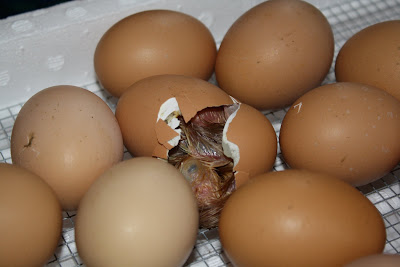 Just as we read, 21 days later... March 13th they began to make their way into the world. 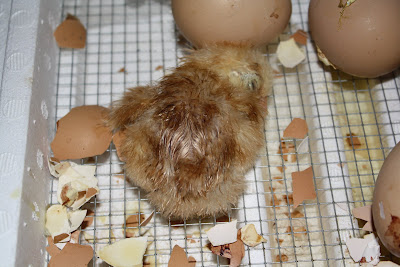 10 days after we put them in the incubator we candled all 41 of them, 6 were not fertile. I was unable to capture this experience in photos but I did get it on video. Let's just say it was AWESOME. You could see those little buggers just floating around in the shell. We were all rather excited by our findings. 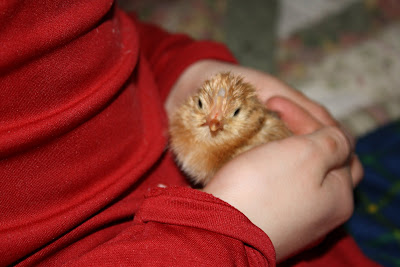 19 out of the 35 fertile eggs hatched. Some of the chicks died and some just never made their way out of their shells. 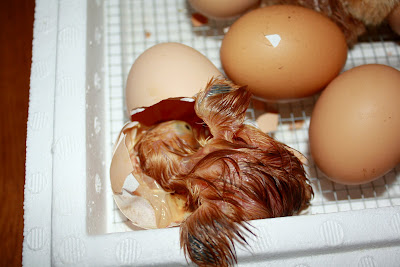 What we've learned, what we will do differently next time around? 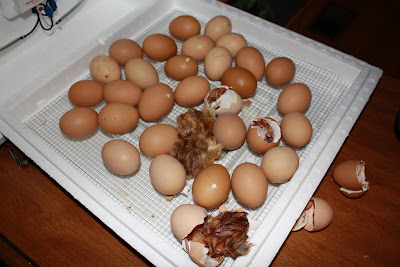 Country boy sold 10 today and has 9 left. I doubt they will be here but another day or two. Chicks go fast this time of year. Duck eggs our next experiment. They will be going in tonight.

Cool! I am glad to read about others' experiments in incubating. I am just starting my own adventure, which I've talked a little about on my blog. Am curious to see how the duck eggs turn out!www.amysoddities.com

Thanks for sharing your experience! My kids loved the photos. :)

I would second your advice about not peeling the shells. It's painstaking to hatch, and it's so tempting to "help"---but I agree with you that it isn't generally a good idea. When I hatched my first ducks for my classroom, I called a friend who is a veterinarian. I was in tears because of a duckling that just couldn't make it out. As gently as he could, he reminded me that they don't all make it, and that hatching is nature's way of seeing if the chick/duck is strong enough to survive. Hard lesson for me to learn, even at age 25.

Hello, Hatching poultry is a fun experience. I have hatched chicks, ducks and quail. My quail starting hatching on the 13th. I have hatched many in my incubator and yes, the water is very important. I also have a turbo fan in my hova bator. I give the chicks no more than 48 hours and then I will gently help and have had many survive doing so. I do wait the 48 hours. Also. Keep the cover on the incubator. Baby chicks have to maintain 98 to 100 degrees even when hatching and also for the first several days. I move mine out of the bator a couple of hours after they hatch and they remain under a heatlamp for a couple of weeks. Good Luck with your next hatch.

Wow, I can't imagine doing it all from scratch, but I'd like one day to have chickens laying eggs for us... I can dream :)

What a great farm business for Farm Boy. I agree it never helps to help them out. My boy had to learn that in college when they hatched chicks in the lab:) He called me and I told him not to help them but he never listens to his mother.
Have fun Farm Boy.

One thing that I have noticed in my own experiences is that the breed of bird being hatched makes a huge difference in mortality, hatch percentage, etc. Mostly we just hatch out Muscovy ducks because the ladies insist on going broody at least once a year. Our drake does a fine job of making sure all of the eggs are fertilized, and we have a hatch rate of only one un-hatched egg in the past two hatchings. This is done outdoors and without the carefully controlled temperatures that so many say are necessary.

Just a thought for your next hatching.

How neat, we did this with some of our duck eggs before and we just let nature do its thing though.

How wonderful! I would love to have a chickie or a duck, but i don;t think I have enough room for them.

Oh i love seeing those little chicks right after hatching...Thank you!

Awesome! This is my first year with chickens so I bought day old chicks from Murray McMurray, but my oldest is already pestering me to hatch some of our own. Someday :)

Oh, my, your photos are great! Can't wait to get back to the ranch and let a hen or two hatch out some spring babies.

I was trying to figure out what breed they were. Also, when you open the lid, besides heat, the humidity escapes. You had a good hatch.

How cute! We are thinking about getting an incubator. We have always ordered chicks and some of our hens have hatched some theirselves but I would like to try to do it ourselves.