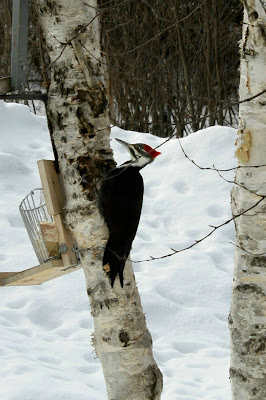 This past weekend we went up to visit my Dad in the deep north woods of Maine. He and my Step-Mom feed a multitude of birds and other critters. The bird above is a Pileated Woodpecker. 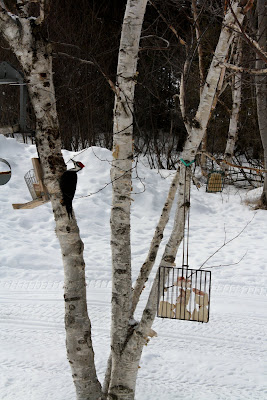 The local grocery store gives my Dad all the fat he wants and he saves all his bacon grease and makes food for his feathered friends. He inspired me to make some of my own. If you click on the above picture to enlarge you will get a better view of the feeder I will refer to (top right, green). You can buy suet blocks which usually cost around $1.00 or you can make them. Instead of copying his recipes down I took that lazy way out and took pictures of them. 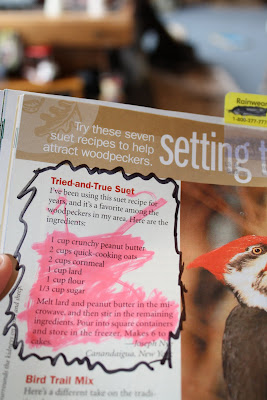 All of these recipes come from issues of Birds N' Bloom. I had some fat in the freezer that I had planned to make some soap with but instead thought I'd give a try at this.
I placed the fat in a crock pot, MM cut it up after it thawed a bit, then I removed the gristle and use the remaining melted fat to make the above recipe. I then packed it down into a cake pan and placed it in the fridge. The next day I cut it into blocks placing one in the feeder and the remaining blocks in the freezer. My Dad saved the molds from previously purchased suet blocks & reuses. That would have been ideal as it makes for a perfect fit but I did not have any. 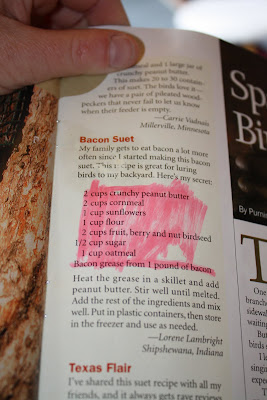 Looking at these recipes you could really just throw together your own version using whatever goods you have on hand as long as the proportions are close. 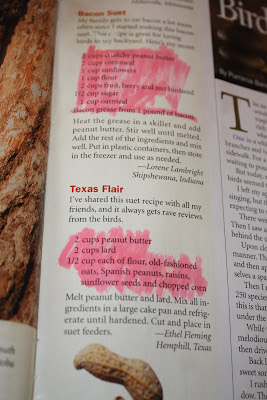 The bird food smelled so good with the blend of peanut butter and oatmeal the kids wanted to eat it. I then had to make peanut butter oatmeal cookies to satisfy the cravings. Had I followed the recipe they may have been edible, instead Barbie & Q (the pigs) enjoyed them. That is the first time I have ever messed up a batch of cookies.
Posted by Country Girl at 7:59 AM

Great photo of the Pileated woodpecker! I've never seen one come to a feeding station like that.

Off to the kitchen I go... great recipes!

What a gorgeous woodpecker! We had one in a tree in our woods last summer, but he never came out for me to get a good photo of him.

We have a pileated woodpecker on our property. It is neat...but a curse as well! You should see the holes they leave in trees!!!

This is a great idea. Bird food is getting more and more expensive now. We didn't buy any this winter.

Your nature walk looks like fun. What a beautiful area and I see you still have snow. Yay for all of the plants! I am so excited for you, getting a jump on spring.

I never got around to hanging my feeders this year. I feel kind of bad about it too, since it has been such a snowy winter here. But, there do appear to be lots of birds around so they aren't starving. I'll have to try out one of those recipes.
Judy

Wow what a great picture. Is it me or is he huge. I've seen woodpeckers in our tall trees here but they don't seem that large.

"Feed the birds, two pence a bag"
I love birding, and pileated woodpeckers are scary huge! You are living the high life!