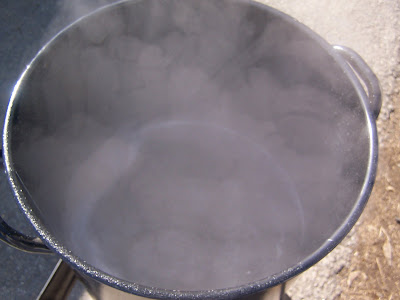 Last weekend we boiled down 9 gallons of sap. We used a propane turkey cooker and I cooked 2 batches, 4 gallons on Saturday and 5 on Sunday. It took all day, like 10-12 hrs each day. Most expensive syrup we've ever eaten. Had I planned ahead I would have gathered wood and cooked it that way but I did not. I also should have added to the syrup as it boiled down. The way I go about it this weekend will be based on the mistakes I've made. I will also use a shallow pan rather than the deep lobster pot as seen above. As of tonight we have 17 gallons to boil down. When the sap was boiled down I was unable to tell when it was ready. One web site said "it will have an oily appearance", and another said when it "reaches 219 degrees". I could use some HELP here from those of you that have experience with this!

Neither method worked perfectly for me. So I went by the guess factor and consistency, probably not the best method.

Batch # 1 after cooled had the consistency of honey. You could eat it by the spoonful and I DID! It is from nature, it must be good for you, right? :)
Batch # 2 turned out a bit on the watery side. Regardless of consistency it is the best maple syrup I've had since I was a child. As it cooked up the sweet aroma brought me back to my childhood at the sugar house in Canada. Interestingly, that is the ONLY memory I have of going there as a child. 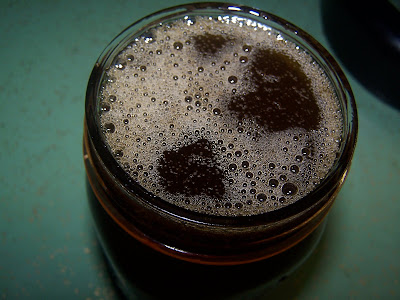 On a final note, I will clarify that I did drink raw milk as a child. My brother reminded me after he read my post. My brother milked for some time as a teenager. He use to fill an old glass vinegar bottle after his workday was done. So I indeed did drink raw milk when I was at my Dad's on the weekends. Funny how I completely forgot about that. I think at the time I did not really know the difference. Last weekend we stopped and bought a gallon of raw organic milk from a farm in my brother's hometown and I made my first batch of mozzarella cheese and it was SO easy and tasty. The whole family liked it! I bet you can't guess what I'll be posting about in the next week or so. Things have been crazy busy here with Springs arrival. I will catch up on everyone's recent posts over the weekend. 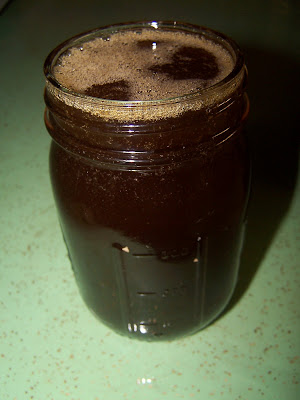 Please please please - I would love the fresh mozz recipe!! I have a son in New Jersey who would prostrate himself at your feet....

We never paid any attention to the temp cause that will vary depending on all sorts of stuff...we go purely by look and taste. We ladle out small portions now and then to check for color and taste...you'll know when it's right I guess. It won't be thick like uncle ben's though...so don't wait for that!

That looks rich! Can't help you with any advice, I have no experience in that department at all.
Can't wait to read all about the mozz. cheese making. That's something I would like to learn this year.

YUMMY!!! Gosh that sounds so good. Raw milk, YUM. My stepdad use to work at a dairy farm and he would bring home gallons of the milk and it would seperate in the fridge. My mom would whip up the top layer and we would drink the lower, I remember it being so much sweeter then regular milk. MMMMM!

Wow, you're doing so great. I wish I could do any of that.

Practice makes perfect. And you are so making me want to go plant some sugar maples!!!

Yahhh...my experience with maple syrup is limited to consumption. But, I am happy to sample and tell you how it tastes! Would that be helpful?

THANKS FOR ALL YOUR COMMENTS! I ALWAYS LOOK FORWARD TO READING WHAT YOU ALL HAVE TO SAY!


Q, I WILL SHARE. TOO FUNNY ABOUT YOUR BOY!

WARREN, I THOUGHT FOR SURE YOU'D HAVE SOME GOOD ADVICE FOR ME.

GW, WE DON'T HAVE THAT MANY BUT I'D LOVE TO PLANT MORE FOR FUTURE GENERATIONS.

CG, TOO CUTE. YOU CAN SAMPLE IF THERE IS ANY LEFT NEXT TIME YOU VISIT. IT'LL KNOCK YOUR SOCKS OFF!

OH YEAH QUENNIE I HAD TO GOOGLE "PROSTRATE".

When my buddy and I made syrup those two years way back when, we borrowed an extra sap pan from some Amish friends, burned wood to boil down the sap, kept added additional sap to the pan, and then when it was boiled way down and skimmed off, and the taste and texture was just to our liking, poured it through the cheese cloth into gallon jugs. The most we made was 20 gallons of syrup in our best year.

Now see, I'm not ambitious enough to make cheese, but maple syrup? I could get into that project! So glad I scrolled down. I've been too busy for blogging lately, too!

We always go by temp. I boil it down outside. You come to learn (by the viscosity and bubbles) when it is ready to finish off. We always finish off inside, as it is easier to monitor. The finishing temp must be b/t 219 and 221. If it is hotter than that, you'll get a lot of crystallization while it sits. We got 3.25 gallons so far; but it has slowed down immensely. It the sap tastes greeney, you'll not want to boil it; it'll be bad. Just call if you need some advice.