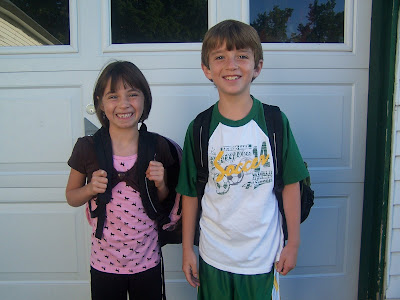 Kiddos started school last week. Exciting for them and us. 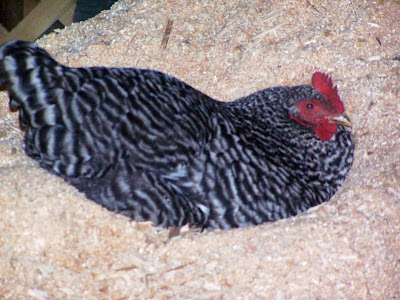 This hen escapes from her pen every morning and heads for the barn to lay and egg at the top of our sawdust pile. 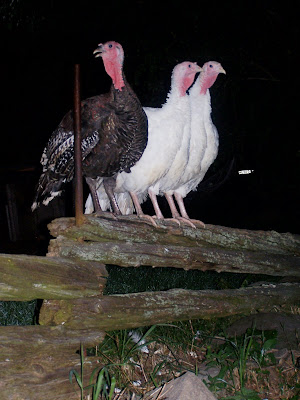 The turkeys are free ranging for now and enjoying the final days here on the farm. 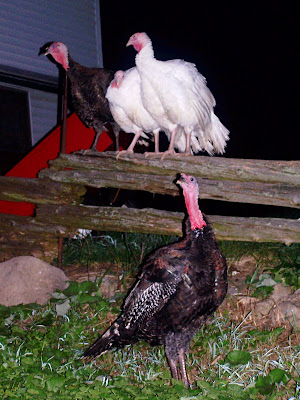 I have dehydrated a couple batches of tomatoes so I will be looking for some recipes come fall. 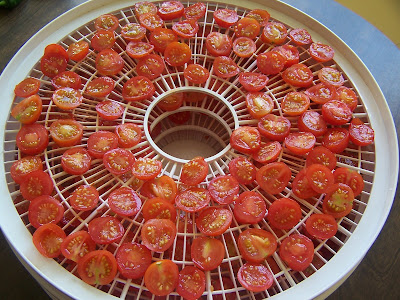 Our goat Oreo has been very sick with what I initially thought was bloat. I was treating him with pepto, and belly massage as suggested by my breeder. At first he was more active and the girth of his abdomen seemed to go down. Yesterday he took a turn for the worse and John called me at work. I called a local vet that was willing to take a look at him, with some resistence John brought him in. (remember he is real frugal and the thought of spending money on a "farm animal" nearly sent him over the edge) Oreo was found to have what they believe is an impacted rumen. They took an x-ray, placed an oral tube and gave him some mineral oil which we are to continuing to do and if it does not resolve the only other option is surgery which they say does not have a good success rate. Oreo is Luke's goat and his cat Annie was hit by a car last week. :( I guess that is how it is on a farm. There is life and there is death. We are hoping for the best but it is not looking good. Thanks to Amy whom gave me advice and suggested the mineral oil, and yogurt, you were right on!

Your kiddos look genuinely happy to be going back to school. How did you do that?
I love when the hens have to lay in a special place and run out like they really have to go.
I'm keeping my fingers crossed that your critter recovers.

I love it when school starts. Yay! Obviously your hen thinks you should move the sawdust pile into her pen! LOL It looks pretty comfy, I'd consider it myself. I hope Luke's goat is better. I've read that olive oil is good for impacted crop in birds so it makes sense that oil works for goats too. Sure hope it all works out!

Nice pictures Kim, I'm glad I don't have to go to school anymore!

Your kids do look like happy campers! I sometimes wonder how may eggs are secretly hidden from our eyes.

I hope your goat "passes" through this dilemma.

Your kids look glad to be off to school. A little relief for all I bet... .

I hope the goat gets better,losing the cat is enough for one week!

How many tomatoes do you typically dehydrate? We usually find that we dry too much stuff (or else we haven't found good ways of using as much as we have). I like to dry stuff though as it is such a space saver.

Glad school is still fun. I hope it stays that way!

Hi~ Just blog hopping and not even sure how I got here! I enjoyed reading your blog...Hope Oreo is feeling better. Stop by and visit me sometime and please do let me know you were there. I love meeting new people and making new blogging friends!

Sugar creek, the kids were happy going back but not all days. Leah was faking a tummy ache this morning in hopes to stay home....not!
Thanks for the well wishes.

Amy, I love school too but when Spring comes I'm always ready to have them home for the summer.

Pine Pod, me too!! I took classes forever and I am so glad to be done with it!

Warren, just 2 large canning jars full. I am mostly freezing my tomatoes for lack of time and I mad one big batch of yummy salsa.

Farm chick, thanks for leaving a comment I peeped over briefly, I will back to visit.

Ashley wanted to learn the guitar too. I couldn't find anyone that taught that so we went to piano. She really likes it. I hope she can learn all kinds of instruments. I would like to learn to play the piano some day. Who knows.