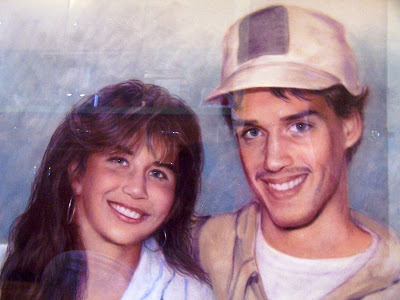 The above picture was taken about 18 years ago. John and I were at the fair and we went into one of those couple dollar picture booths. I guess that I was around 15 and John was about 18. It was a black and white photo that we left it behind when we moved. A little after we moved here on the farm my Mom had the picture made into a water color. This picture does it little justice due to the reflections but is does represent our history together.

Today we celebrate 13 years of marriage!
We met when we were just young, he was friends with my cousin, Jeff. At the time I lived in another town and visited my family on occasion. I was a little tom boy and Jeff and John were always wrestling with me, trying to dump me off a sled while towing it with a snowmobile. The rougher they were the better. I'd always go back for more!
In the summer of 1988 my mother was going through her second divorce and my grandfather offered to help my mother if she wanted to move into the development they all lived in. My mother gave me the choice of doing that or she offered to get an apartment in the town we lived in until I was done school. I was ok with moving so that is what we did.
On the 4th of July, 1988 we moved a few towns North of my hometown. I did not know a soul so I drove my cousin Jeff nuts tagging along with him every waking moment. This is the summer that John and I started to show interest in one another. For the next 2 years we were on and off and from 1990 on we were committed to one another. John lived with my mother and I my senior year in high school. We helped around the house and paid some of the bills. We both worked through high school, he worked as a marine mechanic and I was a waitress.
My mother always felt better when I was out with John because she "knew I would be safe" as she would say. We still got into mischief we just didn't get caught because John was clever (even back then) My friends and I always managed to get in trouble and get caught. The summer after I graduated we moved into our first apartment and acquired are "first child" Maggie.
A little while later we moved to a trailer, we lived at each places about a year and then in November of 1994 we bought our first house, a small gambrel with 3 acres just 1 mi from this place.

That next summer while we were up North visiting my Dad, John and I were on the lake boating and we started to talk about marriage. We had held off on it because "we couldn't afford it" I mentioned that I could do it at a minimal cost and from that day on our plans began for a September wedding. It was not the typical wedding proposal, it was more like an agreement.

We had an outdoor ceremony presented by a wonderful baptist minister (regardless of our catholic upbringings) he was one of our substitute teachers in high school . Long story short we were married on a tight budget. Looking back it was better then many of the 10-20k weddings we've been to and I think a few of the couples are already divorced.
We borrowed and bartered for everything we could including rings, my dress, and old fashioned limo. We grew much of our decorations (gourds, pumpkins, flowers) and we made most of the food ourselves ( I had access to lots of banquet equipment/linens) and a good friend catered it.
It was a great time! Even our DJ thought so, he got OUI that night. That cost him more than we paid him to host the ceremony.

Shortly after we were married I started taking classes toward my nursing degree and graduated in 1999. That following June we had Luke and 2 years later Miss Leah was born. In December 2006 we literally "bought the farm" and in May of 2007 John graduated from nursing school.


We have had a wonderful life together and I cherish our relationship! I cannot imagine life without John. He is good man with so many great qualities.
I love ya babe! Cheers to us for 13 great years with many more to come!
Posted by Country Girl at 12:01 AM

Happy Anniversary!!!! Wow, what a story. Hope you have many more wonderful Anniversaries.

Congratulations! You two make a good looking team. How wonderful for your kids that you are so committed to each other. Best wishes for many more!

Good to hear from you! :) thanks for the comment! and CONGRATS! How exciting! Charley and I only have a year under our belts, but we pray that God will bless us with MANY MANY more to come! :)

What a nice and romantic story. You two sound like a great pair. I wish we lived closer, I'd bring you champagne and four glasses!

Congratulations on 13 and may you have many,many more.

Congratulations!! You two are true soulmates.

Congratulations you two! I love the water color--what a great gift.

Country Girl,
What a wonderful story...sigh... so lovely and romantic! Happy Anniversary to the both of you and may you have many more! The picture of you and John, way back when, was really awesome...what about a picture of you both today?!! Bet you've both matured and grown in so many ways. In thirteen more years you can take another picture...and , well you know what I mean. It would be a nice love story for your children someday! Congrats and Hugs, Aunt Bea

Happy Anniversary! It is nice when you meet the one you supposed to go through life with when you are young.

Today your wedding would not only be considered frugal but also "green"...you two are way ahead of the curve and obviously made for each other.

A toast: May life bring you enough rain to keep the grass green, enough sun to make the flowers grow and enough today to build the memories you will cherish tomorrow. Congratulations my friends....

What a great story! happy anniversary!

Congratulations!!! That's quite impressive in this day and age. This is the first time I've commented, but I really like your blog. I came by it by way of the Fraker Farm. Hope you both have a wonderful anniversary.
~Angie~

THANKS TO YOU ALL WISHING US WELL!!!

Congrats! Glad to see I wasn't the only one capable of pulling off the VERY stylish 90s pencil thin mustache!

I love your story! We didn't have a "real" wedding either and I think it's a good thing. I have a friend who is recently divorced and still paying off her wedding.

I tend to think that the true love shines through small weddings much better than the HUGE fancy ceremonies and receptions.

Congratulations and many happy returns!

That's such a sweet story!!
Hope you guys had a wonderful anniversary!!

Happy Anniversary! I find your story to be inspirational! I think that stories like yours are few and far between nowadays. Then...to buy a farm...oh my my. You're such a neat crew. Our family should do the same...a farm...that's so freakin' awesome! Kim and I married in 1996, and now we have 5 kids with another on the way. I think a farm would be a nice addition to our family.

Happy Anniversary, may you have many, many more. It was such a wonderful story to read, almost sounds like a book. But after seeing your new farmstead, and its activity, the oneness of your family is evident. -Chuck

what a wonderful story....i'm sitting here sipping my coffee..reading this story w/a smile..what a great way to start the day...happy anniversay kim:)