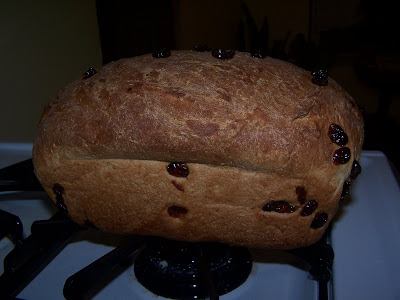 Not the best of pictures but you get the idea. Growing up and up until recently bread as I knew it was sliced and bought in a store. So I decided it was time to make an attempt at bread making. I had made bread a few times in the past with my bread machine using a special bread machine mix, I was never impressed. So I tried two methods this time and only had sucess with the above loaf. I tried a traditional white bread and the above loaf which is Oatmeal Bread. It was delicious and the whole family enjoyed. The white bread I attempted to knead myself and let rise on a cool drizzly day. You know it, it didn't rise until the next day. The oatmeal bread I cheated a little and used my bread machine for a little assistance. I first put the milk and butter in the pan then the dry goods mixed except the yeast then I made a small area in the middle of that and added the yeast and I used the "dough" cycle on the machine. It mixed, kneaded and started the rising cycle. I took it out onto an oil counter, shaped it into a loaf and let it rise for 1 - 1 1/2 in the bread pan and then cooked it in a preheated oven 350 degress for approximately 35 minutes. Viola, my first successful loaf of bread!
Here is the recipe. It was found on the back of a package of King Arthur flour.

(If you use active dry yeast, dissolve in the milk before combining additional ingredients)

To cheat the weather of a perfectly good loaf of bread, place your dough in a greased bowl along side of a pyrex or other glass bowl with steaming hot water inside your cold oven. Close the oven door. This is called "proofing". It will reduce the amount of time needed to rise...and it works really well!

Thanks City Girl, I will have to try that!