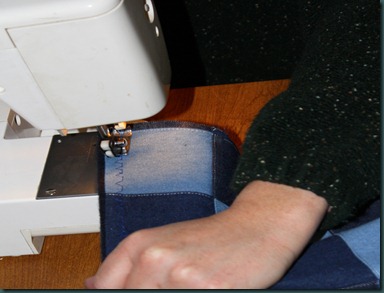 I know the art of sewing isn’t necessarily lost but there are many people of my generation for various reasons that have never picked up a needle and thread.

Shortly after high school (yikes…20 years ago) I bought myself an inexpensive sewing machine.  I attempted to sew a few items, became frustrated, and gave up.  I then lent it out to my best friend for MANY years.  She bought a newer, nicer machine and returned mine.  It accumulated dust for several months until Flower Girl & I were inspired.  Our inspiration was  found at one of our favorite yearly events this past fall, the Common Ground Fair.

Great idea…old t-shirts converted into tote bags.  I don’t know about you, but between the kids and I we seem to always be scrounging around for bags to fill with goodies.

The picture below is where we really found ourselves MOST inspired.  It was a young woman who recycles clothing by piecing items together to create new garments.  She had a lot of really cool clothing for reasonable rates.  The piece that was my favorite was an upcycled beige wool sweater that was converted into a wrap-around skirt.  Something that would have looked perfect with a pair of leggings under it.  Someday I may attempt to make one.   On a recent trip to my favorite thrift store I scored a couple wool sweaters in hopes to make FG and I each a pair of wrist warmers.  Click here if your interested in other good ways to recycle wool sweaters.   You Tube truly is an invaluable resource for teaching yourself new skills!

In December I decided to attempt my first big sewing project, Christmas stockings for the kids. The kids each picked out fabric I had kicking around the house.  CB picked out camouflage material (imagine that) and  FG picked out a colorful print covered with cats & dogs ice-skating.  I followed a 9 minute and 54 second you-tube video and 4 sessions, 10 beers (joking…ok, maybe 2) 6 hours later they were hanging over the fireplace.  As I sat and made the stockings I thought on more than one occasion that I could have easily bought them new ones for a couple bucks (straight from China).  However, the look on their faces and sweet remarks they made when I gave them their new Christmas stockings was absolutely PRICELESS!  Unfortunately, I neglected to take pictures and they are neatly packed away in the barn until next Christmas season.

So a week before Christmas I had this bright idea to make them each a blanket.  As you can see above I bought a cheater quilt fabric (love that stuff) along with some fleece and made CB a blanket.  Needless to say it never made it under the Christmas.  Better late then never.  I then proceeded to make FG’s blanket out of beautiful purple batik fabric and fleece.  I thought I’d be smart and add a wool blanket in the middle to make it warmer…BAD idea for a novice.  Let’s just say it looks like a pre-schooler sewed it but it’s pretty from a distance and warm as ever.   Always best to look at the positives, right?  So much for cleaning out closets and painting this winter.  I think I’ve found myself a new hobby to fill my time

I love this post Kim ! You know I love to sew, if you can sew a straight line you could make your own scrub tops !! When I get home you and CG should come over and have a little lesson ! PS curtains are way easy too.
Hugs
Anna