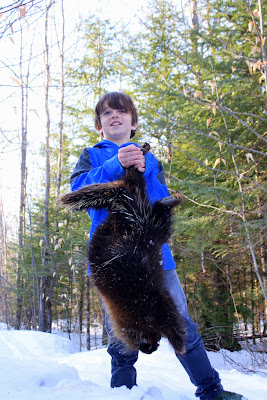 I have NO doubt this boy could survive out in the wilderness! On the other hand, I would never make it out alive unless of course I had Maine Man or County Boy there to bail me out. A few weeks back CB was getting a little stir crazy (aka driving his mother crazy) so MM bought him a pellet gun. CB will spend part of this Spring into Summer working around the farm to pay it off. He offered to give us some cash after he sells some chickens he is hatching out but we declined. I think working for things you want provides for a valuable lesson. 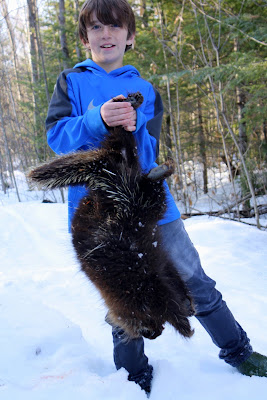 Almost every day after school he ventures out on to the back forty with MM. He goes his own way as MM cuts wood. A porcupine was his first kill with his new gun.
After the kids were ever so persistent their dear old dad, MM reluctantly cut it up and believe it or not I cooked it up. I baked it in a baking bag and it came out pretty darn good. MM and I had a few bites and the kids ate the rest. Actually they all but sucked on the bones. I really can't get over how much of a carnivore Flower Girl is. In a survival situation I could easily eat it but after seeing it dead, smelling it, and the cooking it I found it a little challenging to consume knowing I had an assortment of other foods to eat. We also saved some of the quills for future projects.
Posted by Country Girl at 10:49 AM

That's great, I can't believe they ate it though. I guess I'd try it. He's going to be a great hunter.

I've always wanted to try projects with quills but have never lived anywhere with porcupines. can't wait to see what you come up with!

Congrats CB. Just make sure you don't get any out of pine trees or you will find out how they got their name. A lot of good eating there. The smaller ones are good on the BBQ grill. Big ones too if you par boil or pressure cook them first to tender them up.

That's awesome! I can't get over how big that thing is. When I was a girl we knew a lady who made jewelry out of the quills. She would cut off the sharp ends and then the inside of them is hollow so she would thread them onto string to make earrings and such. She would even dye them different colors. You would have never guessed they were quills, quite beautiful.

As long as you can eat it I have no problem with killing it. If you can't eat it and you kill it, guess whats for dinner Grandma. You guys are very proud of him.

Wow, I didn't even know they were edible. lol Great job!

That's great! I don't think I could eat it though since becoming pretty much vegetarian. The only meat my parent's and I eat is fish, turkey, and chicken.