When I Least Expect It... 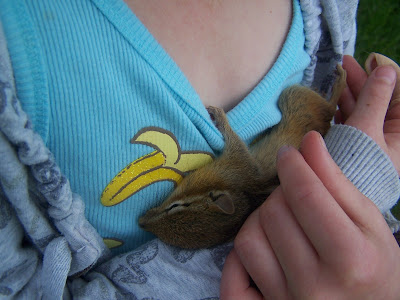 When I least expect it ....My daughter comes running into my house after rescuing a chipmunk from the jaws of our cat. 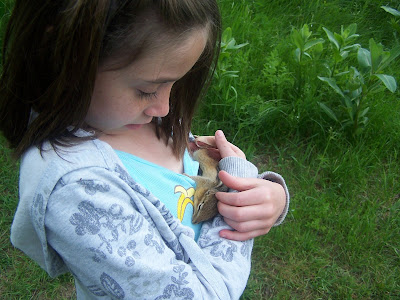 I assure you he was not calm and friendly as seen here in these pictures. Good thing she had a bandaid on or she would have needed one after this little bugger came to life. Despite our efforts to convince her that the chipmunk would not survive she said, "he's a living creature, we have to save him!" So into the kids catch & release tank he went with some fresh bedding, water, and food. About an hour later I glanced out the window to see Maine Man in the pouring rain over by the wood line aka our "pet cemetery". A few minutes later he walked back with carrying my baby girl weeping in his arms. 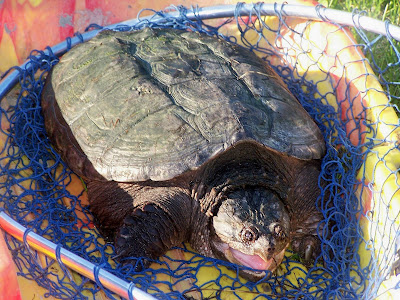 When I l in least expect it..........I am greeted at my car after work by 2 excited kiddos leading me to the barn to show me what they (Chantal, our friends daughter) caught in our front yard. 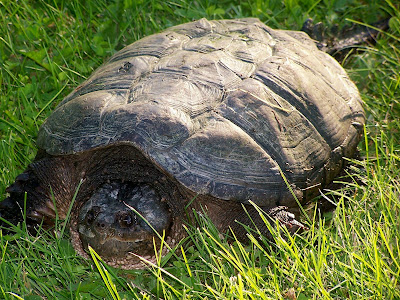 This snapper was nothing you wanted to mess with weighing in at 35lbs or so. She managed to get herself out the kids 50 gallon tank which is like a 5ft drop onto cement and down by the pond 200 yards away. I could not beleive it when the kids told me she was missing. Thankfully our dog Callie spotted her. I had heard her barking but never thought much of it until I put it all together. 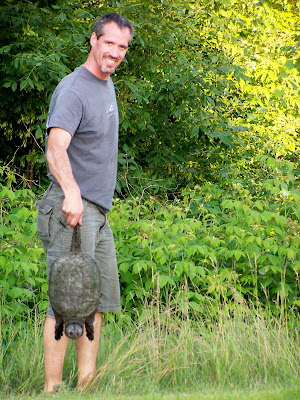 She looks small in comparison to him. I can't imagine why! ;)
Maine Man got her safely back to her desired location, across the street to the river. She got out of the net faster then expected and was playing chicken, nearly road kill. What they say about turtles being slow is a crock. Thanks to MM this story had a happy ending. 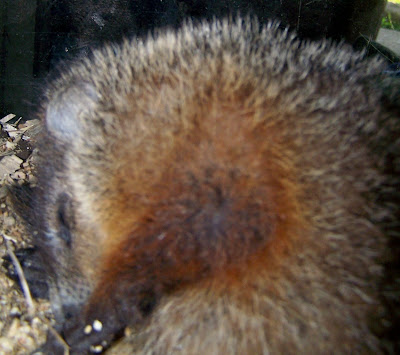 When I Least Expect It...while I am mowing the lawn the kids run over with this baby groundhog in a net . I nod my head thinking it's dead and carry on mowing. Later that evening to my surprise it is still alive in the catch/release tank. This cutie made it a couple days. No matter what they try to "save" death seems too be inevitable.
You just never know what you'll find in the tanks. So far this summer the kids have had snakes, mice crayfish, salamanders, frogs, toads, and frog eggs in addition to the above critters.
What next?
Posted by Country Girl at 11:15 PM

Oh, I'm so sorry for your daughter. That broke my heart reading about her crying.

A similar thing happened here a few days ago. My husband left the door to our shed open and a cat got in and ate one of my daughter's chickens. He carried her back in crying - even when kids live in a lifestyle where death is more visible, it doesn't seem to deaden it for them.

That snapper ... I grew up in Oklahoma and I don't think I ever saw one that big. Your husband's *tall*!

I hate to imagine what would be next...however, I think you will need a really big cemetary..lol. They are so young...after many years of this... you might think to the future...do you have overflow..LOL

I LOVE that you alow them to catch things and get to check them out! I thik I will add a catcha dn release tank. We just normally catch and then just let go right then...but a tank would allow them more time!

The more I hear about your family, the more I love ya! You are just special, dear friend and your family is amazing. Thanks for sharing! :)

I think I heard all the storys. When I went to my grandparents today I saw a chipmunk dead in the pool. Now they have one living near the pool.

Great stories. Those animals are lucky your kids are trying to save them.

Wow! You have a regular zoo there nowadays!