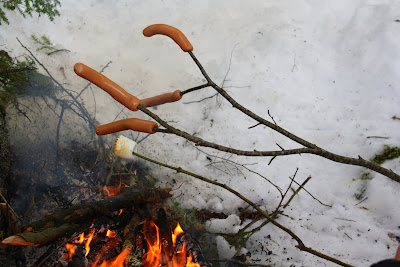 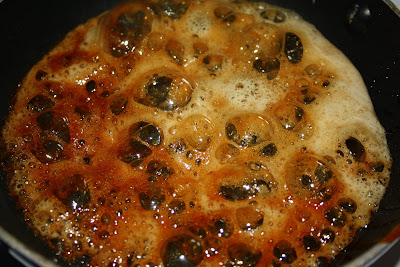 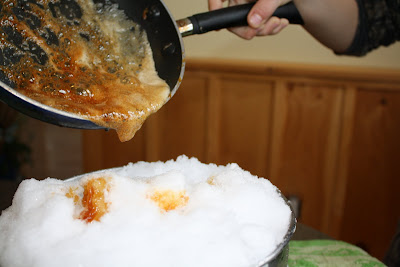 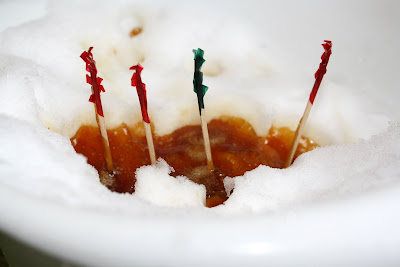 On one of the many snow days the kids had this winter I found them making maple candy "just like the pioneers did". They made it with both store bought syrup and maple syrup we had put up last year. I was the sampler and voted for the homemade. Homemade is ALWAYS best no matter what it is. LOVE that my kids have such great imaginations! Tapping season is just around the corner......can't wait! 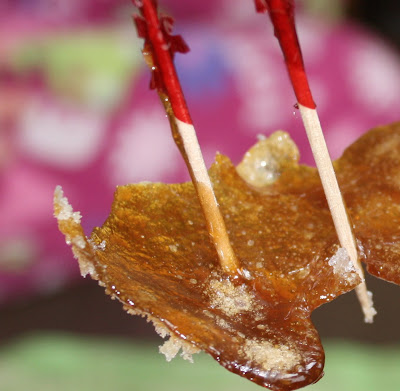 The fire picture at the top of this post was from a recent ice fishing trip when our heater broke. Maine Man & the kids started a fire for warmth & cooking. MM was pretty proud of his quadruple hot dog roasting stick.
Honestly, I have nothing against TV, video games, and toys when used in moderation. My kids have a Wii they bought with their own hard earned cash. I actually love playing Just Dance when I'm able body ...not as of lately ;) On the other hand I am against video games that encourage violence. I think they desensitizes children.
I am even ok with the kids watching TV although if it was not for MM & the kids I would so NOT have cable TV. I do not watch much TV. Although I will admit this season I am watching Survivor as there is a local Mainer in the game. We also have a Survivor pool going at work and I potentially could win $180. I was assigned Stephanie, the chick that had the heels on last night, WTH? I hadn't watched Survivor since Flower Girl was in the womb, 8+ years ago. She was actually named after one of the contestants...lol. I do not agree with some of the shows that are broad casted but there is also many shows that can be educational. Country boy loves watching Myth Busters & Man vs. Wild. I'm often amazed by what he learns from the shows.
As for toys, early on I learned not to waste a whole lot of money on them because in all reality my kids just didn't play with them and they often end up in the bottom of a landfill or Goodwill.
Good Ole' Mother Nature is the best toy box of all!
Posted by Country Girl at 11:00 AM

That maple candy looks great!! And very cool quadruple hot dog roaster! I'm with you on the tv thing too. We try to limit it because kids don't develop much of an imagination while watching TV! :-)

I so agree! We didn't bother getting tv hooked up when we moved into our new house. You know what? We don't miss it. We have some Mickey Mouse dvd's for the kids for their very short allotment of tv time. We signed up for Netflix and stream older seasons of The Cat in the Hat and other shows we've approved of when they need a mix up. And any shows the man and I like to watch? We can stream them online - which also reduces our wasted time on commercials.
Instead, we spend our time in the kitchen, playing in the snow or making crafts. It's wonderful.
I can't wait for maple season. We can't tap our own this year. No big maples at our new house. :-(